Any and all projects that a software engineer joins will come in one of two forms: greenfield or legacy codebases. In the majority of cases, projects will fall into the realm of the legacy repositories. As a software engineer, it is our responsibility to be able to strategically navigate our way through either type of project by looking objectively at the opportunities to improve the code base, lower the cognitive load for software engineering and make a determination to advise on better design strategies. But, chances are, there is a problem. Before architecture or design refactors can be taken its best to take a pulse on the health of your platform End to End (E2E). The reason being, lurking in a new or existing platform is likely a common ailment of a modern microservices approach – the inability to test the platform E2E across microservices that are, by design, commonly engineered by different teams over time.

I recently worked on a greenfield platform and nearly 6 months into the project, one of the most critical parts of the project had fallen several months behind from a quality assurance perspective. It was no longer possible for QA to catch up, nor was it possible for QA to engineer and execute E2E testing to complete common user journeys throughout the enterprise system. To solve this conundrum, E2E data generation tools needed to be created so that the QA team could keep upbuilding and testing every scenario and edge case. As I see it, there are three main requirements for an E2E account and data generation tool. The tool should:

1) Create test accounts with mock data for each microservice

2) Link those accounts between up and downs stream microservices

Using a tool like Swagger, QA can use the API description for REST API, i.e. OpenAPI Specification (formerly Swagger Specification) to view the available endpoints and operations to create accounts, generate test data, authenticate, authorize and “connect the microservices”.

By creating tools for E2E testing, our QA team was able to eliminate the hassle of trying to figure out which upstream and downstream microservices needed to be called to ensure that the required accounts and data were available and set up properly to ensure a successful test of all scenarios i.e. based upon the variety of different data types, user permissions, user information and also covering the negative test cases. The QA team was able to catch up and write their entire suite of test scenarios generating the matching accounts and data to satisfy those requirements. The net result of having built an E2E test generation tool was automated tests could be produced exponentially quicker and the tests themselves are more resilient to failure.

Even though the microservices pattern continues to gain traction, developing E2E testing tools that generate accounts and test data across an enterprise platform will likely still remain a pain point. That having been said, the purpose of this article is to raise awareness. Software Engineering Leadership has an opportunity to step up and ensure that the enterprise system that they look after is healthy E2E. I can’t think of a better way to maintain a healthy system than to ensure accounts and data in the lower environments actually work and unblock testing end-to-end. 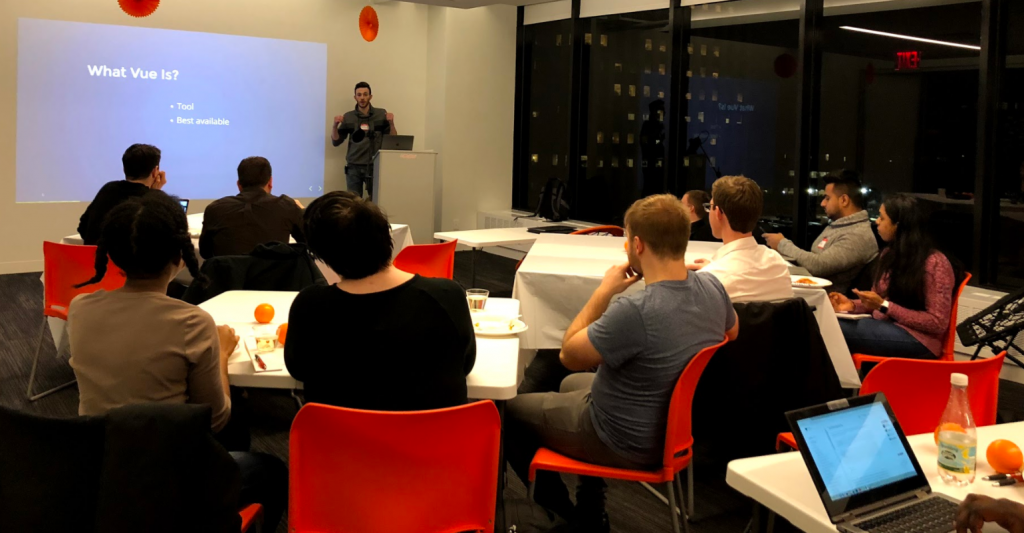 Anthony is back with part 2 of his workshop series on Vue.JS. If you couldn’t make it, take a look!

Sari walks us through CSS best practices to help you keep your styles neat, tidy, and easy to maintain. If you couldn’t make it, check out the video below and make sure to sign up for our next workshop via Meetup!

From Mayank:
“Bugs in production must be evaluated carefully. Sometimes bugs may look simple from change perspective but can cause a big nightmare when you think about production impact. Here is an example of one such case where a bug in 3 lines of code created a big nightmare for the whole team.”

From William:
“NodeJs is the hottest topic in backend dev – but is still widely misunderstood. Without understanding and discipline, nodeJS begins to resemble a spooky spiderweb of unrealized good intentions.”